In order to format your references according to our guidelines

Dear  author, In order to format your references according to our guidelines, please  see the following video-clip and   the EndNote file. Please take the references from PubMed with NLM  format

Male gender is an obvious risk factor for severe acute respiratory syndrome coronavirus 2 (SARS-CoV-2) infection and mortality rate is higher in men than women. Undoubtedly, gender-related behavioral factors, such as higher amounts of smoking, alcohol consumption, and biological differences in immune systems could make males more vulnerable. The role of androgen-responsive elements (AREs) of transmembrane serine proteases type II (TMPRSS2) gene as one of the major players of male dominancy in severe COVID-19 infection has been under appreciated and needs to be clarified. 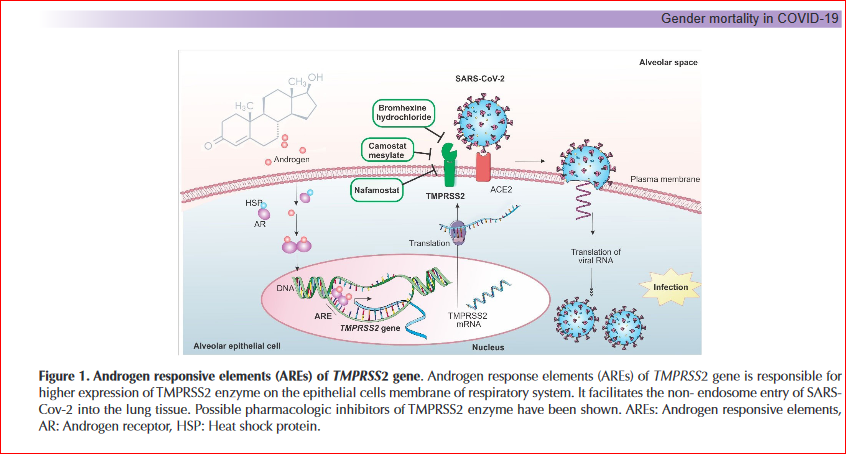 COVID-19 interactions with angiotensin-converting enzyme 2 (ACE2) and the kinin system; looking at a potential treatment

The novel coronavirus disease 2019 (COVID-19) is a rapidly expanding infection around the world. The world Health Organization (WHO) in March 2020 announced the Coronavirus pandemic. This infection causes many deaths on daily basis. Therapeutic options are currently limited. It is revealed that COVID-19 binds to human angiotensin-converting enzyme 2 (ACE2) to enter the host cells. One of the activities of ACE2 is hydrolyzing the active bradykinin metabolite [des-Arg973] BK (DABK). A decreased activity or reducing expression of ACE2 by the virus impairs the inactivation of DABK. This enhances its signaling through the bradykinin B1 receptor (BKB1R) and could lead to fluid extravasation and leukocyte recruitment to the lung. Targeting the bradykinin system by either blocking the bradykinin production or blocking bradykinin receptors may open a new potential therapeutic window for the treatment of COVID-19 induced acute respiratory distress syndrome (ARDS) particularly before patients enter the irreversible stages. 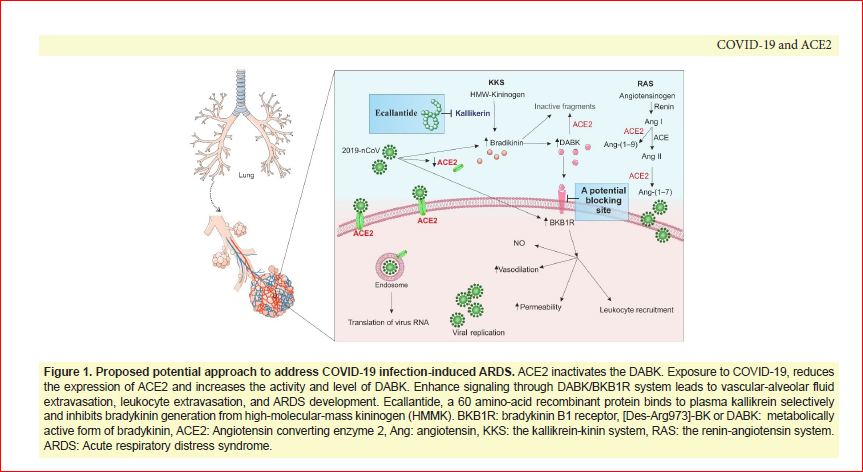 Renal disturbances by coronavirus disease 2019 (COVID-19), consisted of acute kidney injury, due to acute tubular necrosis induced by sepsis, hydration, cytokine storm syndrome, rhabdomyolysis and hypoxia. As the direct cytopathic effect of virus on various renal cells has been detected in previous studies, direct virus invasion to the renal tubular cells and interstitium or glomeruli is possible. Previous studies showed that coronavirus enters into the cells by angiotensin-converting enzyme II receptors that are extensively presented in the renal cells. Further, acute kidney injury in COVID-19 is strongly associated with higher mortality and morbidity and is an indicator for survival with Coronavirus infection. In the overall approach to patients with COVID-19 infection, special attention should be paid to control of classical risk factors of kidney injury.

Keikhaei B, Bahadoram M , Rajaei E, Alikhani K, Helalinasab A. Possible ameliorative effect of colchicine on the prevention of cytokine storm and its associated hyper-inflammation in patients with COVID-19. J Prev Epidemiol. 2020;5(1):e02. 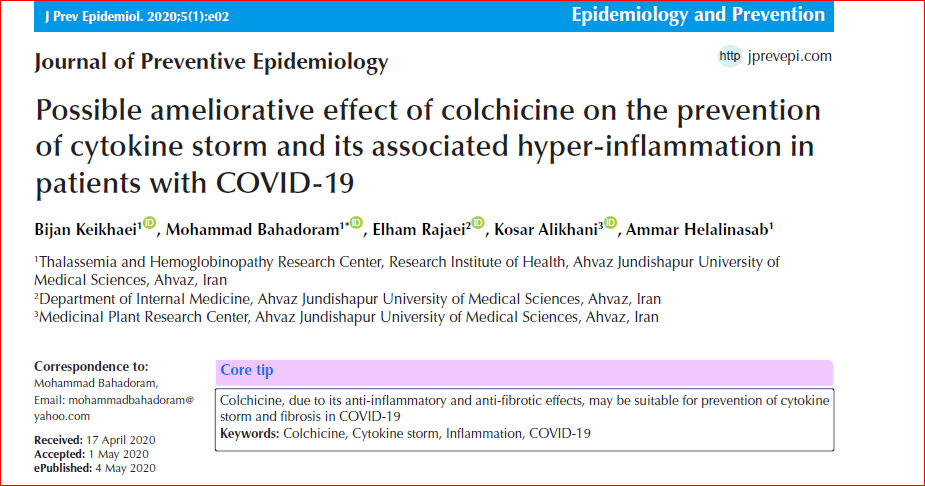 Coronavirus disease in 2019 (COVID-19) has spread around the world and caused significantly pandemic mobility and mortality. Severe acute respiratory syndrome-coronavirus-2 (SARS-CoV-2) usually infects lungs first and involves other organs including kidneys subsequently. Acute kidney injury and proteinuria in patients with COVID19 are resulted from the direct infection of the spikycrowned viruses to proximal tubules and podocytes, leading to acute tubular injury and collapsing focal segmental glomerulosclerosis. Therefore treatment strategy should target against the direct infection of SARS-CoV2 to the renal tissue. 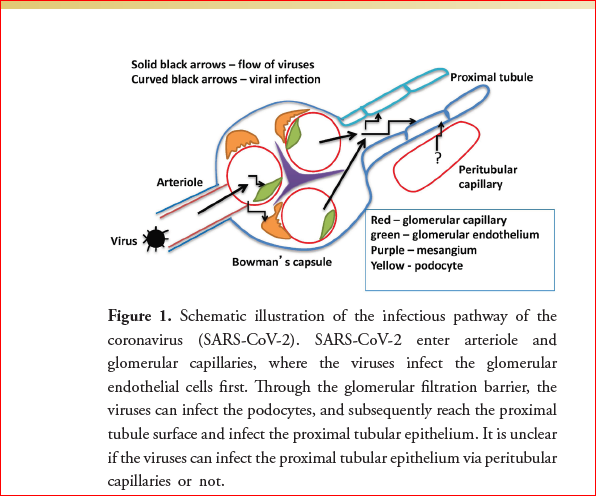 Collapsing glomerulopathy (CG) is being increasingly reported in African American patients with COVID-19 infection during the current pandemic. It is possible that CG following COVID-19 infection in this population may be linked to underlying APOL1 kidney risk alleles, which are not uncommon in this ethnic group. This lesion should be considered in the differential diagnosis of rapidly declining renal function in association with heavy proteinuria in the setting of COVID-19 disease, especially in patients of African ancestry.

Perspectives on the relationship of renal disease and coronavirus disease 2019

Coronavirus disease 2019 (COVID-19) is now a pandemic and its death toll is rocketing up. Patients with acute kidney injury (AKI) and chronic kidney disease (CKD) are at high risk of developing COVID-19 complications and COVID-19 infection can also lead to renal dysfunction. Considering the importance of kidney function in COVID-19 patients, the present review is aimed to dig into the available evidence about kidney and COVID-19. We summarize the mechanisms underlying the renal injury in COVID-19 patients, and treatment strategies in dialysis and kidney transplant patients. We conclude, it is imperative to highlight the early monitoring of patients with AKI and carefully control kidney function during severe acute respiratory syndrome coronavirus 2 (SARSCoV-2) infection.

It is imperative to highlight the early monitoring of patients with AKI and carefully control kidney function during severe acute respiratory syndrome coronavirus 2 (SARS-CoV-2) infection. 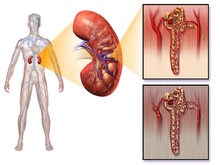 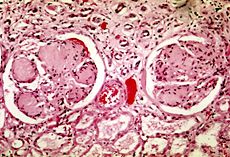 Diabetic kidney disease: a report from an ADA Consensus Conference

Nasri H, Ardalan MR, Rafieian-Kopaei M. Mechanistic Impacts of Medicinal Plants in Diabetic Kidney Disease. Iran J Public Health. 2014 Sep; 43(9):1311-3.
Herbal medicines have been traditionally used for the treatment of diabetes mellitus. Some medicinal plants contain compounds that can be effective in impaired glucose tolerance. Recent pre-clinical and clinical trials have also demonstrated their beneficial effects on diabetes associated complications, especially on diabetic nephropathy. Although some plants have been shown to have toxic effects, hut several species with beneficial effects on diabetes mellitus and in the prevention of kidney complications in diabetic patients have been identified. These effects have been observed with both bioactive compounds and crude extracts isolated from anti-diabetic plants. In particular, plants such as Sclerocarya birrea, Persea americana, Ficus thonningii and Helichrysium ceres have been shown to have renoprotective effects. Isolated compounds such as oleanolic acid have also been shown to possess renoprotective effects in experimental diabetes in animals. Hence oleanolic acid caused an increase in renal Na+ excretion in streptozotocin-induced diabetic rats, which was mediated by an improvement in glomerular filtration rate , read the story

The theme of World Hypertension Day 2014: Know your Blood Pressure

World Kidney Day will be celebrated on March 12, 2015. This time the theme is on Kidney Health for All.

Implication for health policy/practice/research/ medical education
Diagnosis and treatment of renal diseases in a timely manner are important. Assessing cardiovascular status (and risk factors such as smoking and lipid profile) is essential, because it has an important role in mortality. Also, due to the possibility of osteoporosis and its subsequent fractures, bone densitometry is important. If the glomerular filtration rate is less than 30 mL/min, and lower the patient should be referred to a nephrologist. The slogan of the world in 2015 on March 12, 2015, is to invite everyone to drink a glass of water and give one too to celebrate their kidneys. This is a symbolic gesture to remember that kidneys are vital organs and that they should be cared; it is a way to make people more conscious about their lifestyle choices.

The next World Kidney Day will be held on Thursday March 10, 2016. The theme for 2016 will focus on Kidney Disease & Children: Act Early to Prevent It. To get the 2016 campaign started or for more information on World Kidney Day, 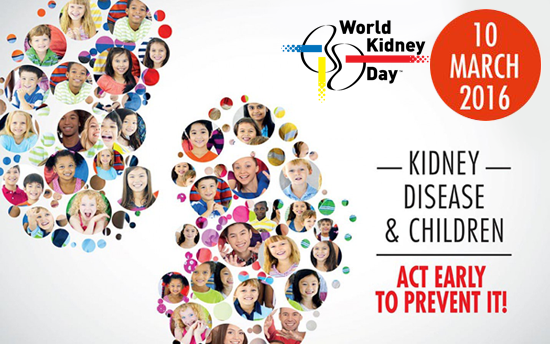 World Kidney Day 2016: Awareness for Saving Kidneys
The general message of the world kidney day is a concerted knowledge against the illnesses that lead to end-stage kidney failure, through better education, improved economic opportunity, increasing community outreach and access to protective medicine for individuals at the highest risk. These might end the unacceptable relationship between chronic renal failure and disadvantages in these societies. Annually, world kidney day reminds us that renal disease is a common harmful complication and in many cases treatable. The task of the world kidney day is to develop consciousness so that everybody cares for their kidneys and, if suitable, check and assess if they are at risk of renal disease. Prevention of renal disease, prompt recognition, and following renal protection protocols are serious goals for the world kidney day. As an annual global alertness and education event, the 2013 World Kidney Day focused on increased awareness of acute renal failure among hospital staff and physicians and the necessity for a public awareness campaign to clarify this hazardous situation and make ‘kidney attack’ recognizable for the community, similar to that conducted by stroke and heart attack campaigns. Currently, acute renal failure is inefficiently directed in clinical education and training, and mainly ignored by people. Prevention of renal disease, prompt recognition, and following renal protection are serious goals of the world kidney day.

World Diabetes Day takes place on November 14 of each year
World Diabetes Day (WDD), on the 14th November every year, now becomes a globally-celebrated event to increase awareness about diabetes and specially to improve and treat diabetic kidney disease

In 2015, WDD activities and materials focus on healthy eating as a key factor in the fight against diabetic kidney disease and a cornerstone of health and sustainable development….
read the story…..

Implication for health policy/practice/research/medical education
World diabetes day was envisaged in 1991 by World Health Organization (WHO) and the International Diabetes Federation in response to increasing concerns about the escalating health threat that diabetes currency poses. The theme of this year (2015) is act today to   change tomorrow concentrating on the importance of starting the day with a healthy breakfast to help prevent the onset of type II diabetes and effectively manage all types of diabetes to avoid complications.

World lupus day (WLD), reflects the necessity for heightened public knowledge, ameliorated patients’ healthcare services and to increase investigations on the etiology and a cure for systemic lupus erythematosus (SLE), enhanced physicians’ diagnosis and finally treatment of this disease. 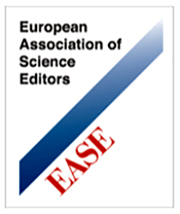 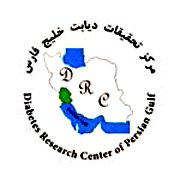 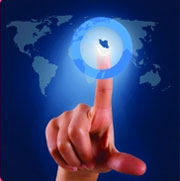